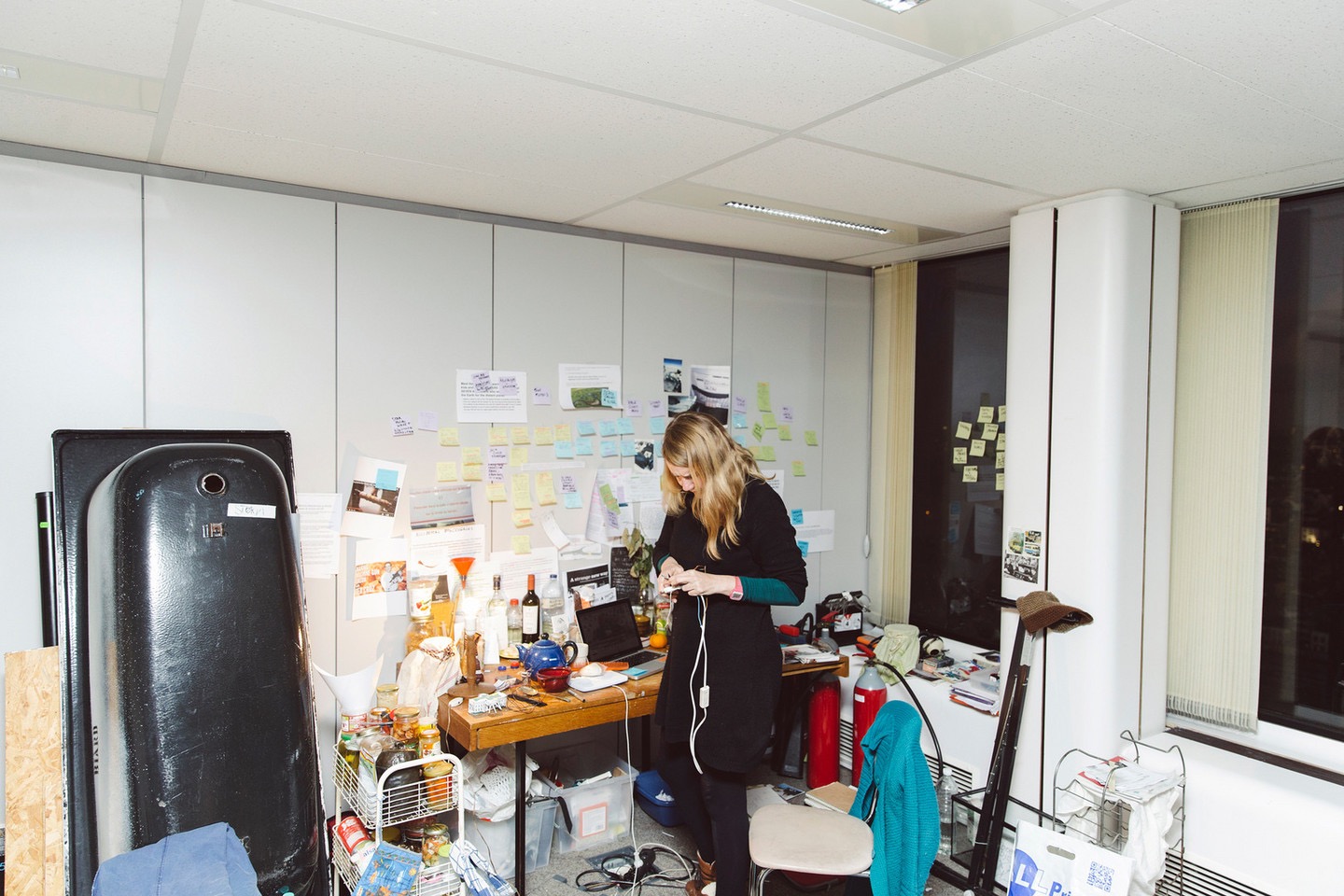 Gosie Vervloessem lives and works in Brussels. She studied Pedagogical Sciences at  KULeuven and was later awarded a master’s degree in Audiovisual Arts by the LUCA School of Arts Brussels. Since 2013 she has been following the Advanced Performance and Scenography Studies course at a.pass.

Gosie Vervloessem’s artistic research focuses on the position of the researcher in times of multiple crises. Her work faces the challenges that arise within this role, and looks for new ways of producing knowledge. Her practice is an ongoing quest on finding  tools to relate to a world that is messy and chaotic. Therefore she juggles with and re-interprets the practices of cooking, digesting, co-digesting, immersion or osmosis, as tools to literally embody that relation.

[Immersion or osmosis in comparison with digestion covers more holes than the mouth and anus and therefore it seems a richer concept.]

In scrutinizing this relationship she focuses mainly on the concept of nature and tries to unravel the ideas that underpin this concept. In doing that, she identifies herself as a Sick Detective, a character that involves the vegetal kingdom as a possible ally in her research. Her work is highly inspired by plant biology, comic books, horror movies. It is mainly presented as lecture-performance, in the form of workshops or publications.

THE HORROR GARDEN — for kids that get bored in Biology class

Gosie vervloessem, aka the Sick Detective, guides you through the botanological map of the magical pentagon to explore her intimate relationship with some particular plants in Brussels.

In may 2020 the Toxic Detective and the Guardian of Nature started working on their first case under the name ‘Forensic Plant Lab’. The lab investigates crimes involving more-than-humans.

Detective Agency of Monsters is a detective agency that investigates how the horror genre, the monsters that inevitably belong to this genre and the character of the sick detective could help us to understand a world that becomes more and more unthinkable.

The stomach, the cave and the oven, fortunetelling from the gut (2019)

But what happens in the oven in times wherein the world becomes more unthinkable, less graspable and less defined and the hero has no clear route out anymore? What happens if we get lost in our own digestive tract? What is the status of dough and the meaning of baking in unthinkable times? What are the voices at the entrance of the cave telling us?

In this investigative performance Gosie Vervloessem tells the story about three particular locations where the human-vegetal relation come to a climax: the nature reserve, plantation and the botanical garden, not accidentally places with a colonial past.

Hush Hush of the Bush is a new outcome towards a video installation about Gosie Vervloessem’s research on invasive species.

Deep Space Navigation is a workshop and a poster that focuses on co-digestion as a way for cruising complexity.

What can we learn about the outside world by exploring its insides?

Recipes for Disaster: Greetings from Nagasaki (2016)

Greetings from Nagasaki is a lecture-performance on the Japanese Knotweed, an invasive species that can also be found in our region. The story of this plant is the starting point for a cooking session and a semi-scientific, poetic-absurd reflection on the theme of migration.

Recipes for Disaster – The Magazine and Tupperware Party (2015)

The project Recipes for Disaster: The Magazine & Tupperware Party cooks up some crucial questions about classification and control: How do we cope with chaos in our daily lives? How to free ourselves from the quarantine of our own bathroom? How to argue for a messy and less sterile life in times of Ebola?

In their experimental workshop Gosie Vervloessem, Naomi Kerkhove and Wendy Van Wynsberghe try to answer the question how we can satisfy this cosmical desire while in the meantime our daily duties await. With everyday material they cook, blend, mix, scrape and squeeze tsunami's, volcano eruptions and earth quakes together.

Recipes for Disaster – The Marketstand (2012)

‘Recipes for Disaster - The Marketstand’ is a mobile marketstand in which Domestic Science Club presents different experiments, results of former research, perfomances, workshops, in an attempt to create, in a dialogue with the visitor, a sublime landscape.

TOPOS 4 proposes the body as inherently Sci-Fi, an entanglement of micro and macro entities and performativities which are considered ‘natural’ and ‘artificial’, ‘human’ and ‘non-human’, ‘organic’ and ‘synthetic’, ‘analog’ and ‘virtual’. This collective residency wishes to bring together a small group of people to exercise perceiving the body as a multiplicity. It’s about questioning the role of the body in creating affinity through difference. How can we practice dis-identification through the engagement with the body?

The point of departure for this residency is the question: if the world manifests itself as a disaster and becomes almost unthinkable, how can we try to understand that world? The effects of climate change and a phenomenon such as the current outbreak of the coronavirus COVID-19 are driving the unthinkable to the limit: we are becoming more and more aware that our lives take place in a world that is both human and non-human. How do we understand this intense intertwining? How to navigate the world here and now?