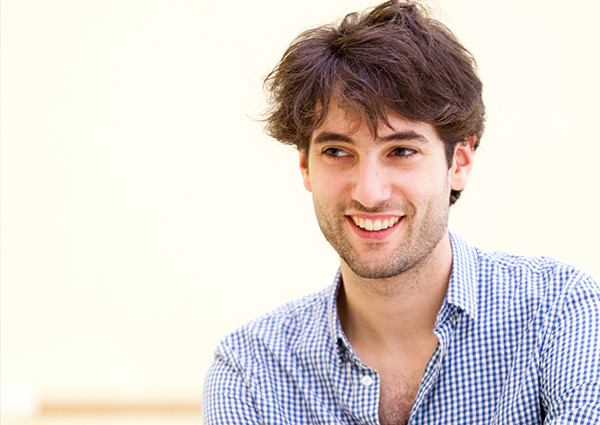 Noé Soulier started his training as a dancer at the Paris Conservatoire National Supérieur de Musique et de Danse. He continued these studies at the National Ballet School of Canada and at P.A.R.T.S. in Brussels, where he graduated in 2010. Meanwhile he was active as a performer in the work of a.o. Daniel Linehan. Noé studied the harpsichord and in 2013 he completed his Master’s degree in philosophy at the Sorbonne. In 2011-12 he took part in the residency program of Le Palais de Tokyo, Paris.

Often combining different interests, the work of Noé Soulier is characterized as highly reflexive. In hybrid lecture performances such as Idéographie (Ideography), Soulier analyses the language of dance as well as canonical philosophical discourse, in an attempt to revive and actualize their meaning. Also in the solo The Kingdom of Shades (2009), the trio Little Perceptions (2010) and the quartet D’un pays lointain (2011), Soulier generates a polyphony of meaning by confronting various points of view in one dynamic perspective.

Movement on movement (2013) is a lecture-performance investigating the ways in which we talk about movement and the ways in which movement generates discourse. Noé Soulier physically reproduces sequences from the Improvisation Technologies where William Forsythe demonstrates different tools used to generate movements. By using them as dance material within an artwork, Soulier shifts their status, addressing the question: how can movement be about movement? In 2014, he made a creation for the Ballet de Lorraine which prolonged his research on the disruption of the ballet vocabulary.

Noé Soulier completed an artistic trajectory within wpZimmer from 2010-2014.

In his new lecture performance Noé Soulier investigates how movement, instead of referring to an external thing, can be about itself.

Signe blanc prolongs the research from The Kingdom of Shades within ballet mime vocabulary. In the solo, a dancer executes a sequence of movements referring more or less literally to objects or gestures.

In Ideography, Noé Soulier unites his fascination for dance, philosophy and music. Composing disparate theoretical argumentations through the use of choreographic, musical or cinematic tools, he engages the audience in an active thought experiment structured around various perspectives on a single event.

For D'un Pays Lointain Noé takes the balletpantomime as a starting point. As a movement language highly affected by the logic of spoken word, today, pantomime is one of the aspects of ballet that appears most outdated.

In Little Perceptions, movements are defined as actions. They are primarily defined by their goal, not by their visual qualities.

The Kingdom of Shades is a proposition towards a different reading of the ballet legacy.