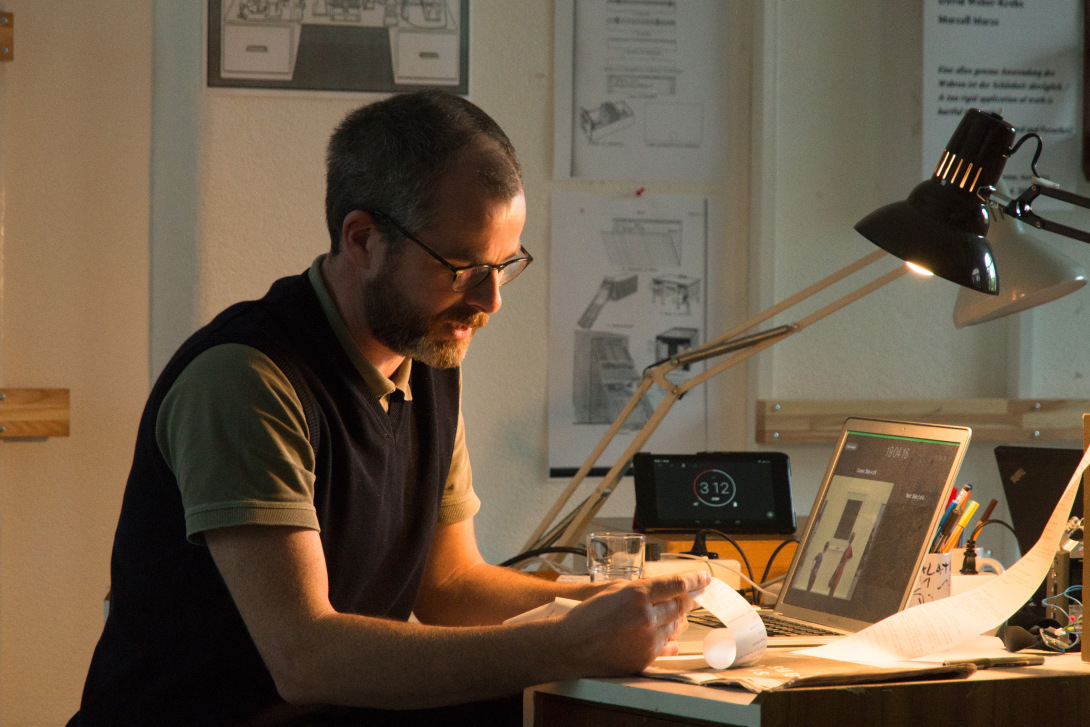 David Weber-Krebs is an artist and a researcher based in Brussels. Departing from a specific context, David develops experimental processes, that question and challenge the traditional relationship between the work of art and its public, more specifically in the realm of performance and theatre. He creates situations engaging the spectator in a complex dispositive between getting absorbed or merging with an art piece and keeping his critical distance towards it. Be it by staging actors (Into The Big World), a donkey (Balthazar), a minimalist sculpture (Performance, Robert Morris revisited) or a public space (Miniature), the form is ever reduced to its simplest expression. It becomes like a projection screen, inviting the spectator into a mode of active contemplation where meaning is not given but produced by the spectator.

Recent works are Tonight, lights out! (2011/2013), Balthazar (2011/2015) and The Guardians of Sleep (2017), and the installations Immersion (2014) at the Weltkulturen Museum, Frankfurt and The Earthly Paradise (2017) at Museum für Neue Kunst, Freiburg. David is collaborating on the project Miniature with Alexander Schellow since 2005 and on the project Catalogue of Situations with Jan- Philipp Possmann since 2007.

David studied at the University of Fribourg (CH) and the Amsterdam School of the Arts (NL). He is currently affiliated as a doctoral artistic researcher to KASK / School of Arts (2017-2022), where he conducts his research project If we approach the theatre in the Anthropocene as a fragile ecosystem. What is the responsibility of the Human in it?

Since 2017, he is also member of THIRD! the PHD preparation and research program of DASResearch, Amsterdam and is regularly invited to conduct workshops, projects and mentoring trajectories at different visual arts and performing arts school among others Das Graduate school, the Dutch Art Institute (DAI) and at the Performance department of KASK.

This performance is a movement performance staging two performers. The world of the first performer is shrinking. He is cared for and accompanied by a second performer. The direction focuses on the creation of the experience of distance and proximity, intimacy, and estrangement.

The Silencing of the World (working title) focuses on the relationship between collective practices of attention and the silencing of nature, or, the narrations that we, as humankind, create around it and the sounds we decide to select from it. Through a performative and participatory strategy, The Silencing of the World (working title) engages the audience in a collective reflection: how can we collectively approach the sounds of a world that is dying? How can we imagine a future beyond those sounds?

The Actual Event (working title) oscillates between speculative strategies (letting people imagine how things could be) and material awareness (make them aware of what is actually happening in the space) and is part of an ongoing research on how to bring urgent ecological issues at the core of the theatre experience.

From the 18th until the 31st of August 2014 David Weber-Krebs works in wpZimmer on his new creation Into the Big World. The première will take place on the 4th of November in Stuk in Leuven.