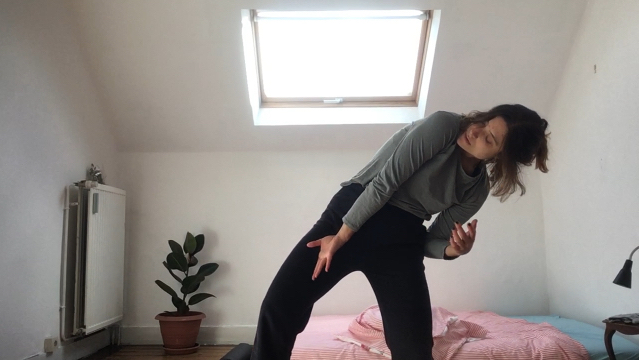 Lara Ferrari – tummma has a Master in Spatial & Visuals Arts from ISAC, Belgium & Lic. and graduated with a degree in Choreographic Composition from UNA, Argentina.

Her practice focuses on performance and writing as activators that generate states of empathy, vulnerability and fragility in the body. Working from the commitment to think from affections and sensitive practices as a politics that enables dissimilar perceptive modes and builds other ways of relating to each other and to the environment.

Since 2017 she has been working with Josefina Imfeld in the collective Métodos de supervivencia, developing performative practices and fragile encounters. Their current work Synchronization Practice, a practice for a remote encounter, counts with the support of the Metropolitan Found of Arts (Arg) and won the National Found of Arts (Arg) for the creation of a book to share these practices.

In her writing she is currently working with a fragmented narrative where stories of the huge crisis of December 2001 in Argentina are mixed and intertwined with stories from the Guaraní culture.

Currently she works in collaboration with Carolina Mendonça in Zones of resplendence, work that was presented in El Caldo, Gessnerallee (Ch) as work in process. And with Cathrin Jarema developing Part 1: A black hole of deception presented in L’estruch (Es), De Markten and Volksroom (Bru).

Zones of Resplendence is an investigation by Carolina Mendonça that explores the figure of the female warrior to imagine and rehearse what could be the preparation to a war fought with different weapons. A sci-fi speculation that engage with different body practices as a way to prepare an imaginary army. The word 'resplendence' vibrates its double sense of extreme light and explosion.