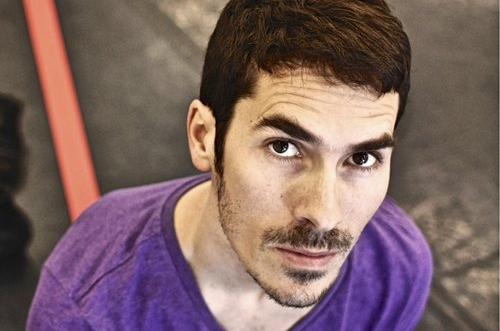 Albert Quesada is a Spanish dancer and choreographer based between Brussels and Barcelona. He trained at MDT (Amsterdam) and P.A.R.T.S. (Brussels) after his studies of philosophy and multimedia engineering in Barcelona. The exploration and translation of musical structures and compositions into choreography and the invitation of an audience to perceive and to listen to the proposed works, stands at the heart of Quesada’s choreographic work. Next to that, Albert is intrigued by group movement and dynamics, sparkled by his collaboration with ZOO/Thomas Hauert. Under the company ACME, he holds many artistic projects, both educational and for the stage. This is together with his long term collaborators Marcus Baldemar, Federica Porello, Mireia de Querol, and Zoltán Vakulya.

Together with Katie Vickers he co-directs two educational programs in the USA: the theatre and dance summer program at Mercersburg Academy, and the Practicing Performance / International Dance Festival at the Ohio State University. In 2005 Albert created Solo on Bach & Glenn which has been touring since, and which gave birth to the duet Solos Bach & Gould (2010). This was followed by Trilogy (2011), created with Vera Tussing, an evening of three short pieces exploring musical structures. Albert then expanded into larger, group choreographies with the pieces Ensemble (2012), Slow Sports (2012) and Wagner & Ligeti (2014), an examination of our understanding of orchestral music, Slow Sports Outdoors (2014), Slow Sports Kids (2015), OneTwoThreeOneTwo (2015), a duet inspired by the world of flamenco, and VIVA (2016), where the amateur group De Genoten dances to Vivaldi’s Four Seasons.

His latest work is a collaboration with Octavi Rumbau, Federica Porello and Zoltán Vakulya: It’s time (2017). Since June 2009 Albert has been dancing with the company ZOO – Thomas Hauert (Accords, You’ve Changed, In Vivo Danse, Mono, Inaudible). He has also performed for Benjamin Vandewalle.

Katie Vickers, Marcus Baldemar and Albert Quesada are collaborating with The Penguin Cafe to perform alongside the release of their new album coming out in July 2019.