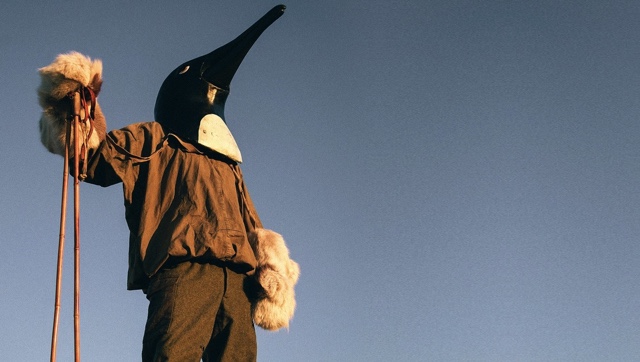 Katie Vickers, Marcus Baldemar and Albert Quesada are collaborating with The Penguin Cafe to perform alongside the release of their new album coming out in July 2019. Currently, the band plays alone without any visual support, the goal of this project is to integrate dance into a pre-existing music concert. How dance can weave itself into the context and structure of a concert.

The dancers do not directly dance to the music but allow their dancing to live beside the melody, both sound and movement have their own autonomy, yet together flow in a symbiotic way. The music of Penguin cafe is full of sonic landscapes, giving an endless mood to space, thus the dancers try not to override or dive into the music per se, but stay along the edges of it, asking how dance can be added to the environment rather than changing it.

SP, BE
http://acmearts.xyz
Albert Quesada is a Spanish dancer and choreographer based between Brussels and Barcelona. He trained at MDT (Amsterdam) and P.A.R.T.S. (Brussels) after his studies of philosophy and multimedia engineering in Barcelona. The exploration and translation of musical structures and compositions into choreography and the invitation of an audience to perceive and to listen to the proposed works, stands at the heart of Quesada’s choreographic work. Next to that, Albert is intrigued by group movement and dynamics, sparkled by his collaboration with ZOO/Thomas Hauert. Under the company ACME, he holds many artistic projects, both educational and for the stage. This is together with his long term collaborators Marcus Baldemar, Federica Porello, Mireia de Querol, and Zoltán Vakulya.

Together with Katie Vickers he co-directs two educational programs in the USA: the theatre and dance summer program at Mercersburg Academy, and the Practicing Performance / International Dance Festival at the Ohio State University. In 2005 Albert created Solo on Bach & Glenn which has been touring since, and which gave birth to the duet Solos Bach & Gould (2010). This was followed by Trilogy (2011), created with Vera Tussing, an evening of three short pieces exploring musical structures. Albert then expanded into larger, group choreographies with the pieces Ensemble (2012), Slow Sports (2012) and Wagner & Ligeti (2014), an examination of our understanding of orchestral music, Slow Sports Outdoors (2014), Slow Sports Kids (2015), OneTwoThreeOneTwo (2015), a duet inspired by the world of flamenco, and VIVA (2016), where the amateur group De Genoten dances to Vivaldi’s Four Seasons.

His latest work is a collaboration with Octavi Rumbau, Federica Porello and Zoltán Vakulya: It's time (2017). Since June 2009 Albert has been dancing with the company ZOO – Thomas Hauert (Accords, You’ve Changed, In Vivo Danse, Mono, Inaudible). He has also performed for Benjamin Vandewalle.

US, BE
https://kosmonautproduction.org/artist/katie-vickers/
Katie Vickers is an American artist who lives in Brussels. She is a 2014 graduate of P.A.R.T.S. and 2010 graduate of The Ohio State University. She has danced for and with Daniel Linehan (USA), Martin Nachbar (GE), Benjamin Vandewalle (BE), Vera Tussing (GE), and most recently was a guest artist for the Cullberg Ballet’s production, Figure a Sea, choreographed by Deborah Hay. She has conducted workshops internationally, and spearheaded the Mercersburg Academy Summer Program for Dance and Theatre in the U.S as well as Practicing Performance at The Ohio State University.

1985 ◊ SE
Marcus Baldemar is a dancer living and working between Brussels and Stockholm. He started his professional dance training in Umeå (Sweden) in 2004, followed by a year at SEAD (Salzburg, Austria) before ending up at P.A.R.T.S. in Brussels. After graduating from the training cycle in 2008 he has worked as a freelance dancer for various choreographers around Europe, such as David Zambrano (Shock), Rui Horta (The Tears of Saladin), Andros Zins-Browne (Limewire, &&&& and The Host) and Albert Quesada (Slow Sports & Wagner/Ligeti). He has also collaborated in creating pieces, such as Fun, Laughs, Good Time with Ludvig Daae and Rebecka Stillman or Manuskriptet Dodo with Karina Sarkissova, a project initiated by Koreografiska Konstitutet in Stockholm. From 2012 to 2014 Baldemar took part in the creation and performance of The Knife/Sorkklubben's Shaking the Habitual the show, which toured through Europe and North America. At the moment he is involved as a performer in Eveline Van Bauwel's new piece Infinite journey/In this together and Daniel Linehan's upcoming creation dbddbb. As a choreographer, Marcus Baldemar is working on his first solo performance.