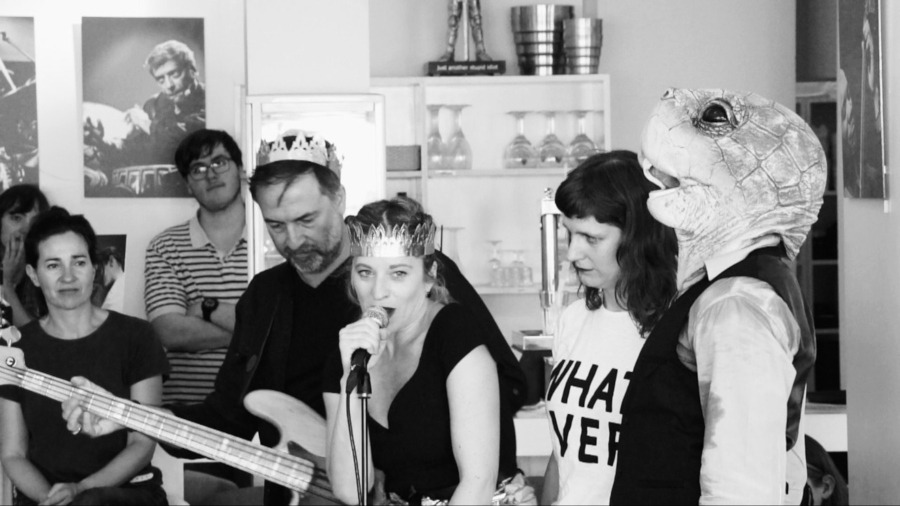 When I look at a Strawberry, I think of a Tongue

In When I Look at a Strawberry, I Think of a Tongue dancer/choreographer Lisi Estaràs, musician/composer Mirko Banovic, theater maker/actrice Kristien De Proost and dramaturge/theater maker Sara Vanderieck combine their different disciplines and are inspired by Goliarda Sapienza’s novel The Art of Pleasure. Their different approaches come together in a multidisciplinary narration about a separate past and common present. The foursome meet each other under the pretext of Sapienza’s issues on social and political engagement, personal growth, parenthood, sexual desire and aging.

The intention is not to bring a literal reproduction of the 700 page-thick novel on stage, but to use these pages rather as a starting point for the dialogue between the four artists about life and “being” in the world today and how to convey that. The result is a series of “tableaux” inspired by the novel and their own personal relationship with the contemporary world and the specific context in which they create this performance. The research will take place on the margins between abstract and concrete, private and public, fiction and reality.

To ensure that every performance takes place as much as possible in the here and now, it has to be as flexible and adaptable. Each performance is accompanied by a unique “playlist” of selected “tableaux”, based on the artistic urgency of that day and context. In order to make the performance as agile as possible, it is initially created for different settings outside the regular theater halls: from small rooms, to public spaces, to cafés or brasseries, to museums. In a second phase, a version of the work for theater will also be created. This version will be shown in the regular performing arts circuit.

1971 ◊ AR, BE
Lisi studied dance in Cordoba (Argentina) and in Jerusalem at the Rubin Academy of Music and Dance. Then she danced with the Ensemble Batsheva in Tel Aviv. Since 2007, Lisi has worked with Ballet C de la B. She danced in Iets op Bach, Wolf, vspr and pitié, C(H)OEURS en Tauberbach van Alain Platel en in Tempus Fugit van Sidi Larbi Cherkaoui.

Over the years, she has also started to create own work. In 2015 she created GLOED together with Serge Aimé Coulibaly, a dance performance for people over 50. With dramaturge Sara Vanderieck, she also made Monkey Mind and When I look at a strawberry, I think of a tongue.

1972 ◊ BE
Kristien De Proost is a Belgian theater maker and writer. She studied German Philology at the KUL and Theater at Studio Herman Teirlinck in Antwerp. As an actress she worked with directors such as Luk Perceval, Wayn Traub, Josse De Pauw and Julian Hetzel. She played at CAMPO, BRONKS, Transquinquennal, LOD, hetpaleis, KVS and Toneelhuis, among others. From 2004 until 2017 she was part of the artistic core of the Brussels collective TRISTERO. She played in repertoire pieces such as Altijd 'tzelfde and Abigail's Party and made collective creations such as Coalition and Reset. With her own creation Toestand she was selected for Theater Festival and has toured internationally. She has left TRISTERO in 2017 to focus more on writing and solo work.

1978 ◊ BE
http://www.saravanderieck.be/
Sara Vanderieck obtained her degree in theatre directing at RITS in Brussels. In 2006, she joined les ballets C de la B, first as production manager for VSPRS, pitié! (Alain Platel) and Patchagonia (Lisi Estaras) later as artistic assistant to Alain Platel for Out of Context – for Pina and C(H)OEURS and of Lisi Estaras for Dans Dans and Leche.

In 2017 she adds another layer to her work. Together with artists Lisi Estaras, Kristien De Proost and Mirko Banovic, Vanderieck is creating When I look at a strawberry, I think of a tongue, a multidisciplinary collective performance.