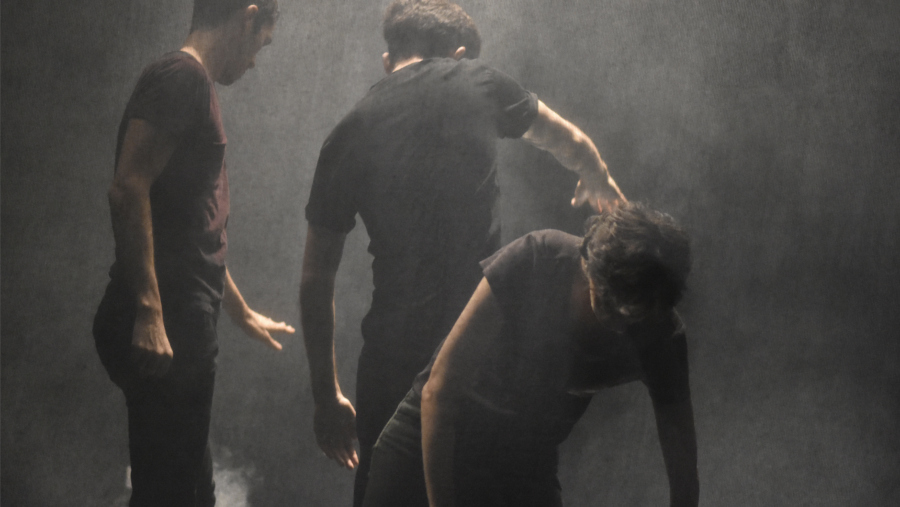 “(…) A multiple, ramified time in which every present instant splits into two futures, so as to form an expanding, dizzying web of divergent, convergent and parallel times”

Italo Calvino on The Garden of Forking Paths by J.L. Borges

For the creation of Time Emotion (working title), three dancers and four musicians converge on stage to the service of one idea: creating the sensation of a frozen and diluted time, constantly contracting and expanding our perception of sound and movement. The passage of time derives in a spatial construction; the auditory stimuli become tactile, and constitute a journey through an organic sonorous territory.

This germinal idea of the project stems from the reflections developed during the preliminary phase by Octavi Rumbau and Albert Quesada: two artists coming from seemingly different disciplines who share more elements than they could initially have thought. One from the acoustic imaginary of the musical instruments and the electronics, the other from movement combining listening and action.

In Time Emotion dance company ACME and composer Octavi Rumbau will investigate different ways to expand and contract time, either by using repetition, memory, the reminiscence or the instant per se. If we consider chronometrical time, the piece will be a one hour long ‘journey’, but subsequently a journey of relative duration for the psychological time of each spectator. An immersion from music into a discipline that integrates in a primary and organic way the parameter of ‘time’: dance. And at the same time, an incursion of dance in the world of musical composition.

ES/BE​/HU/IT​
Dance company ACME is composed of Albert Quesada, Federica Porello, Zoltán Vakulya, Mireia de Querol and Marcus Baldemar. It has developed over the years by performing and creating around Europe. In their last quintet, Wagner & Ligeti, the dancers guide the audience in an exploration of two pieces: the overture to Wagner’s Tannhäuser and György Ligeti’s Lontano.

Speed and its different qualities is one of the most developed elements in their performances. The co-existence of different temporalities is a starting point to deal with questions related to idiorhythm: movement prior to rhythm. The use of slow motion in Slow Sports, the irregular loops in Wagner & Ligeti, the accumulation of rhythmical qualities in the flamenco music of OneTwoThreeOneTwo, have been key for the development in specificity of speed, aiming to alter the spectator’s perception.

1980 ◊ ES
http://www.octavirumbau.com
Octavi Rumbau focuses on the search for new sound spaces of interaction between electronic and instrument, as well as to deepen into the malleability of musical time. He started his studies with Enric Palomar, Yoshihisa Taïra and Agustin Charles. Afterwards, he moved to Paris to study Composition at the Conservatoire National Supérieur de Musique et de Danse de Paris (CNSMDP) with Frédéric Durieux. He also attended the Cursus in musical computing at IRCAM. He has been commissioned by Auditori de Barcelona, Barcelona Orchestra, Fundació Tàpies, ME_MMIX, CrossingLines Ensemble, Bcn216, Festival d’Òpera de Butxaca, UMS'n JIP/Festival Mixtur, Rémi Durupt, Miguel-Ángel Lorente, etc. He has also collaborated, among others, with the Ensemble Multilatérale, Taller Sonoro, Ensemble Links, Funktion, Lorraine Orchestra, Balearic Orchestra, Alberto Menchén, Laurent Durupt, Jan Gerdes or Philippe Spiesser. He has received distinctions from the Frederic Mompou Composition Prize in 2005, the first Dolors Calvet i Prat Composition Prize in 2008, the Colegio de España and Instituto de las Artes Escénicas y de la Música (INAEM) award in 2012, the aid for young creators of Fundació Phonos of Universitat Pompeu i Fabra in 2012 and the First Prize at the Berliner Opernpreis in 2013.