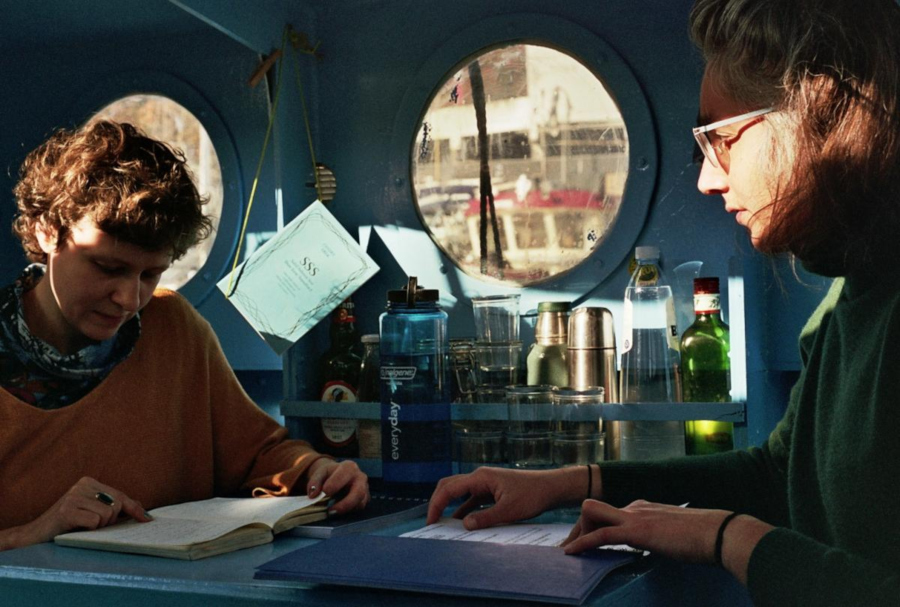 In Oceanographies, Marialena Marouda is interested in knowledges in the plural. She focuses particularly on those knowledges of ocean that are inherent in encountering it. The focus of her research is therefore the relation between two kinds of bodies: the human body and the vast body of water that the ocean is. It is the relation of the hands to the mud, the ears to the breaking of the waves, the feet to the feeling of sinking, that the work focuses on –rather than on the ocean “in itself”, devoid of the human presence.

The work seeks to weave the complexity that arises from those interactions into the tellings of stories of encountering the ocean -and their demonstrations. The aim is to develop a nomad oceanographic institute in which the (re-)telling of those experiences, the performing of the relationship(s) that are described, can summon or evoke the ocean. That is, performance becomes here a tool and an art-science by means of which the ocean and the researcher can be merged into a single body of water.

Oceanographies (try-out) has been presented in OpenHouse13 on 24 June 2018.

1982 ◊ GR, BE
http://poetryexercises.de/
Marialena Marouda works in the fields of performance art and choreography. Marialena studied philosophy and visual arts at Columbia University in New York, USA and continued her studies at the Institute for Applied Theater Studies at the University of Giessen, Germany. In May 2018 she completed the program for artistic research Advanced Performance and Scenography Studies (a.pass) in Brussels, Belgium.

Marialena develops in situ, research based performance works. Her current project Oceanographies was presented in the framework of the Wandering Arts Biennial 2018 in Brussels, Belgium, among others. Former works include Poetry Exercises: an Archive of (un)familiar Things (2016), a performative archive presented within the Frankfurt City Archive during the site specific festival Implantieren2016, Walking in the City: on the Poetics of Space, presented at the 2013 Athens Biennial and Walking Exercises (2011-13), which premiered in the Mousonturm in Frankfurt. She has collaborated with the choreographic collectives MAMAZA and Deufert& Plischke and with the choreographer Martin Nachbar.

As a dramaturg, Marialena is currently collaborating with Fabrice Mazliah on The Manufactured Series, a series of ten duets, each between a human and a non-human body. She has previously collaborated with the Forsythe Company, Andros Zins-Browne and the Belgian workspaces wpZimmer in Antwerp and Workspace Brussels. Her texts and reviews have appeared, among others, in the performance journals MASKA and Etcetera.