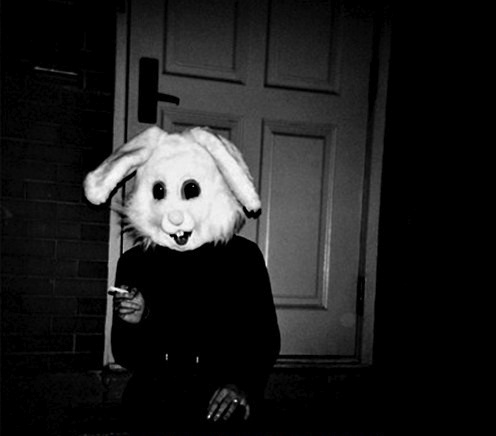 ’There are things we hide only to show them’

To create a sensation, more than often we need to resort to tricks such as costume, a mask, an accessory, outrageous behavior, a distorted voice, or even a role. Yet by doing so, the “real” person exhibiting him/herself is forgotten, a mere stagehand behind the power of this representation. Are we hiding behind this act – this exposé? Who lies behind this dazzling sequined dress, the smoke and feathers?

In their new performance The hide show Lara Barsacq & Gaël Santisteva attempt to reveal the non spectacular side of a spectacular performance. Objects and accessories will be used in order to conceal themselves, in smoke or behind a distorted voice, under a wig or in a dance, in the dark, leaving the stage, performing a magic trick and from time to time, even managing to pull off something truly spectacular. Each attempt leads to an accumulation of successful or failed trials, which gradually reveal the body, the voice and finally, the person behind the facade.

1974 ◊ FR, BE
Lara Barsacq is a dancer and performer. Initially she studied and worked in Paris, but now lives in Brussels. She has worked with various artists in the performing arts and film sector. She has performed and danced with Batsheva Dance Company, Jean-Marc Heim, Guillerme Bothelo, Lies Pauwels, Ben Benaouisse, Tristero, Jérôme Bel, Les Ballets C de la B, Le GrRa, Sarah Vanhee and Benny Claessens among others. Lara creates her own choreographic work in collaboration with Gaël Santisteva.