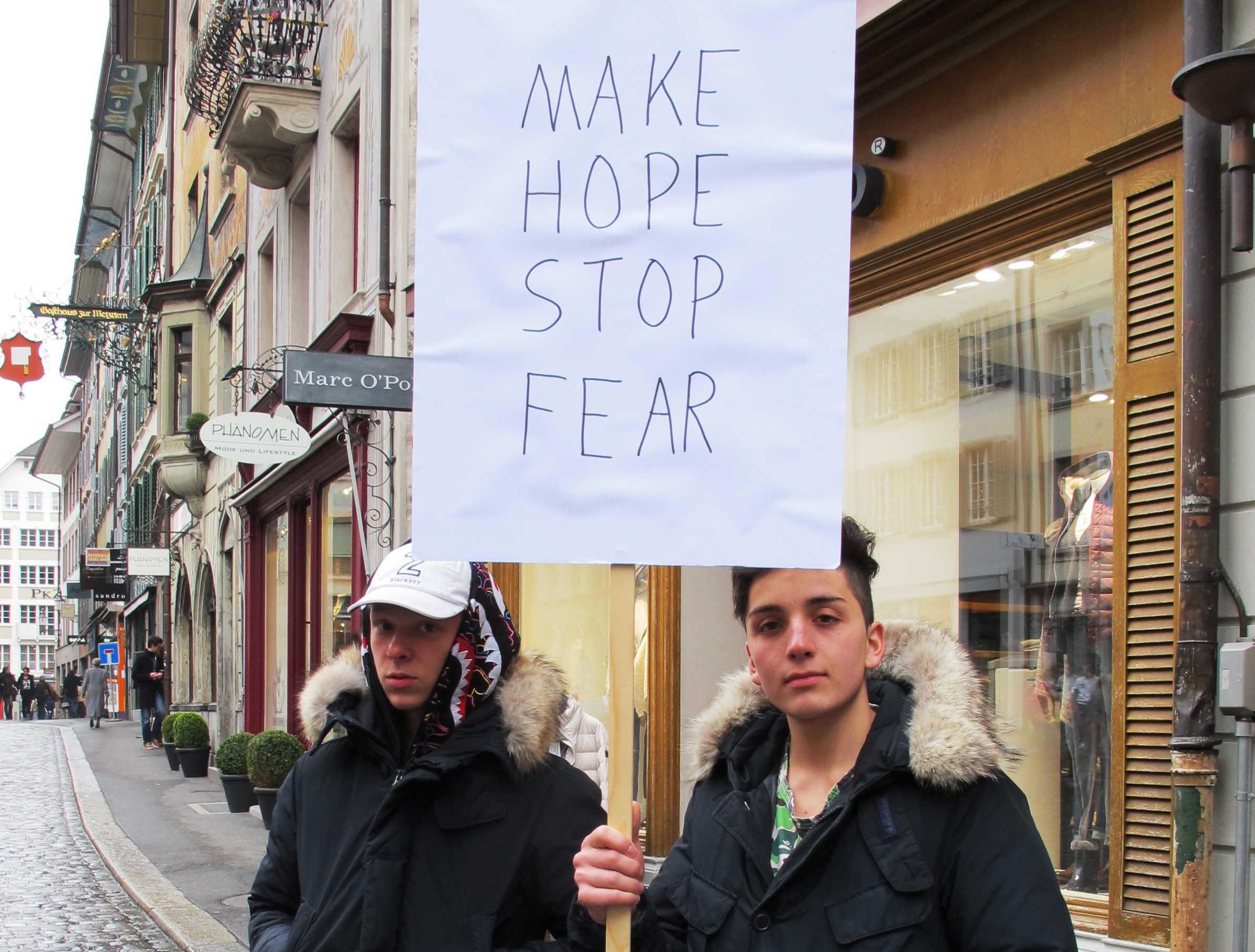 The Art of a Culture of Hope

Hope just means another world might be possible, not promised, not guaranteed. Hope calls for action; action is impossible without hope.

Rebecca Solnit, ‘Hope in the dark’

In 2015 James and Jessica started a long-term process called “The Art of a Culture of Hope”. Looking towards the future, it’s difficult to look at it without fear. Climate change, peak oil, mass migration, wars in the Arab world and beyond, destabilization within Europe, financial instability, the rise of nationalism and the erosion of human rights. The future isn’t looking hopeful.

Jessica Huber and James Leadbitter feel that culture can influence this narrative. As artists they believe in creativity, that people need a space for shared creativity, and that during a time of fear there is very little space for this. Two questions are therefore central: how do we deal with fear, understand its causes and effects on us?; and how can we create a space for potential, a space for hope?

During their time at wpZimmer they will continue their work on the third part of this process, which is an “Archive of Hope & Fear”. This archive is an attempt to find a way of sharing the experiences they have gained during “the art of a culture of hope”: which has become a web of responses and tender provocations, which have been collected across Europe, through the (performative) participation of more than thirty artists as well as through workshops with the (local) public. In this “Archive of hope & fear” contradictions, critique, performances and concrete ideas are gathered: the voices of more than four hundred persons interweave personal challenges with the big topics that frighten all of us. Collected in the form of an archive, they might transmit an image of how a mutually formulated future could appear.

CH
http://www.theartofacultureofhope.com
Jessica Huber (1978) works as an artist in the field of the performing arts and co-founded of mercimax (since 2005), a theatre group based in Zürich. Although most of her early pieces have been dance pieces, her recent work have become more diverse. As a performer she has worked with companies such as the Stadttheater St Gallen, Cie. Hideto Heshiki, Cie. Philippe Saire, among others. She graduated in 2002 with a BA in Dance Theatre, Dance Science and Choreography from the Laban Centre London and the City University of London.

UK
http://www.thevacuumcleaner.co.uk/
James Leadbitter aka the vacuum cleaner is an art and activism collective of one. Working across forms including performance, installation and film, the vacuum cleaner addresses challenging and taboo issues such as consumerism and mental health. Recent international commissions include Festespiele/Gessnerallee (Zurich) and Vooruit/Dr. Guislain Museum (Ghent). He co-founded the Laboratory of Insurrectionary Imagination and is an Artsadmin Artist.