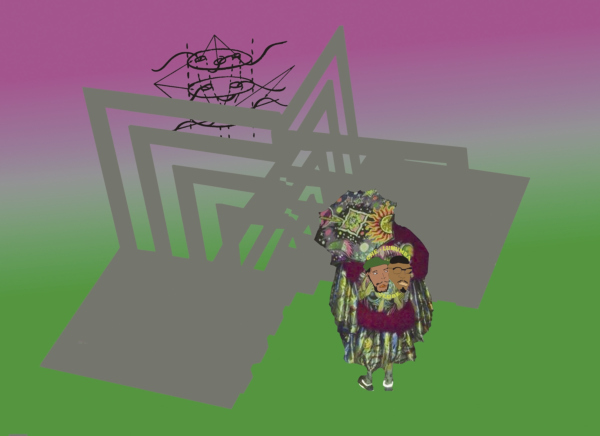 The sun and its images are often used and associated with narratives of progress and productivity. They create what is defined as a solar capitalism, an attempt to take hold of the solar myth: the light, the movement of the earth, water tides and all animal coitus become a capitalist machine, and even cosmologies are at the risk of being colonized. A group of performers from different disciplines (dance, performance, sound,…) embarks on a journey that wishes to reclaim a non-productive – and almost destructive – presence of the sun. They freely merge archaic, pre-capitalist and futuristic imaginary. Is it possible to narrate a myth exceeding the simple use of language, articulated by magnificent costumes, movements, animals and tropical rhythm? For their last two (and longer) performances they invite others to create an unexpected moment beyond the limits of a single form. Exuberant.

1975 ◊ BR
http://www.nerefuh.com.br/
Leandro Nerefuh is an artist self-inscribed in the Brazilian legacy of contructivism tabaréu. Devising a method of formal translation of historical materials to performances, lectures, publications, exhibitions and agitprop experiments, Nerefuh moves through an ambiguous territory between academic discourse and artistic creation. He is also a co-founder of PPUB - Partido pela Utopia Brasileira, a political party active in brazil, Paraguay and Uruguay.

1980 ◊ BR
Caetano is an artist who would like to challenge zombie-centric notions of creativity. He designs spaces and situations in order to help the alienated (human) body in the center of the cybersphere.