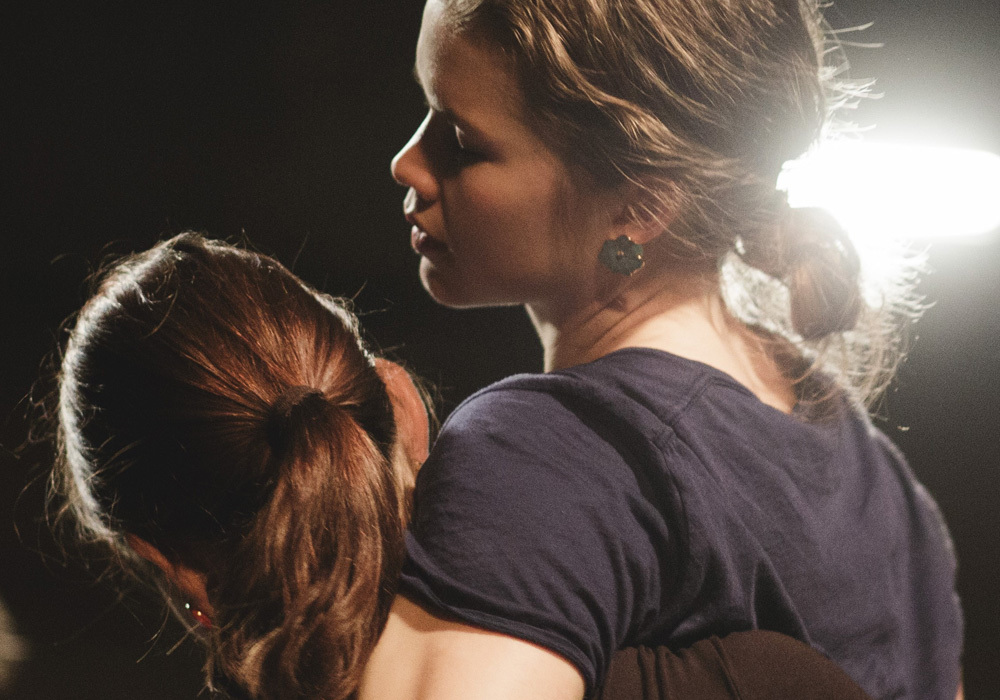 Mer- is a piece for five dancers and five singers, built on songs around death, sorrow and pain from the Renaissance period. Mer- refers to the Indo-European roots of mourir, the French word for dying. At the same time it also refers to the sea, la mer, which carries the idea of something ‘beyond’ the horizon, a sense of boundlessness, mystery and the unknown. The music is executed by Marnix De Cat’s Pluto-ensemble.

The concept of ‘finiteness’ is a vital part of the work of Claire Croizé and Etienne Guilloteau, and played a central part in productions like Affected (2006), The Farewell (2009) and Chant éloigné (2012). In Mer- the choreographers can explore this theme more deeply: death is front and center, but there is still room left for lightness and joy. Dying is, after all, an integral part of life, and Claire and Etienne research both sides of this balancing act: dying as the most exceptional, most unthinkable thing to happen in a human life, and at the same time the most trivial, most common human experience. Gilles Deleuze famously said that death begins at birth. Not a static event, but a constant movement, like a free fall that lasts our entire life. The idea of dying as a performance is the motor of movement in this dance creation.

The five dancers are presented as a group, but at the same time the personality and individuality of each dancer shines through. This way, the choreographers build on techniques that they developed in previous productions, and that are wonderfully compatible with the principle of polyphony: multiple, independent melody lines performed simultaneously. Moreover, this presentation echoes the concept of death as the most individual, yet the most generic experience possible. The piece tries to bring the dancers as ‘close’ to the audience as possible, not just in a physical sense, and without actually making contact.

The piece will focus on the 15th and 16th centuries, also called the early period, and will be based on the Requiem, Missa pro defunctis of Johannes Ockeghem and on compositions from Pierre de La Rue, Josquin Desprez, Richafort, Jean Mouton and Guillaume Dufay.

BE, FR
http://www.ec-ce.be
Claire Croizé graduated from P.A.R.T.S. in 2000. Her graduation project, Donne-moi quelque chose qui ne meure pas, was hailed by the French press as one of the discoveries of PARTS@PARIS. She quickly followed with the solo Blowing Up (2002), produced by PACT Zollverein (Essen), and the trio Runway #1 (2003), created for the Off Limits festival.

Claire started working under the support of wpZimmer (Antwerp) in 2005, and premiered at STUK (Leuven) with Affected, an internationally acclaimed performance consisting of three solos for three women on Gustav Mahler’s Kindertotenlieder. This was also the first collaboration with Jan Maertens, her regular light designer. In 2009, she pursued her work on Mahler’s music with The Farewell, which won the prestigious Prix Jardin d’Europe.

After her period at wpZimmer, Claire continued her choreographic work under the wing of Action Scénique and ECCE.

1976 ◊ FR
http://www.actionscenique.be/
Etienne Guilloteau has graduated in 2002 from P.A.R.T.S. with his solo Love me two times, which toured internationally. He immediately started his collaboration with wpZimmer, where he made the duets Skènè (2004), with Claire Croizé, and La Magnificenza (2006), performed with dancer Vincent Dunoyer and with Hans Meijer, who would become his regular light designer.

Guilloteau explores in his work the different meanings of movement, but moreover the specific relation between the scene and the spectator, who is called upon to complete the proposed images and even to make them more intimate and personal with his/her imagination.

Etienne Guilloteau completed an artistic trajectory with wpZimmer from 2003 until 2009. Since 2009 his work is presented by the organisation Action Scénique, together with the performances of Claire Croizé and Nada Gambier.