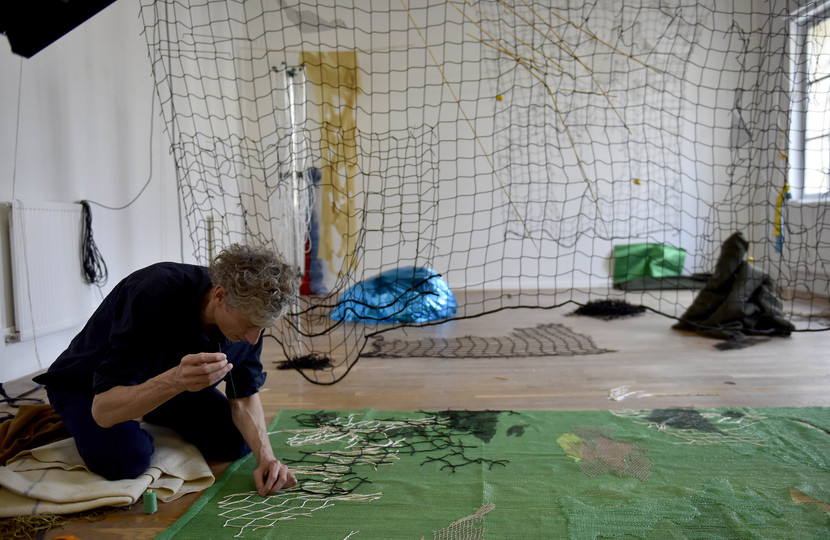 Wouter Krokaert’s art practice evolves around the observation and unravelling of his surroundings. The decision to use a certain medium, results from the desire to concentrate on an aspect of the whole. Thus, when drawing with pencil on paper, it’s about lines, shapes, directions, while photography enables him to get a closer look at colour and light. Working as a dancer or a choreographer is for him also a way of drawing, but with a different relationship to gravity and time.

A next step, undertaken during 2017, was the creation of objects and other visual elements deriving from these observations. These elements are not the end of the line, they’re made to be the fundamentals of a new landscape, a landscape in which Krokaert wants to look for something essential to him, something he hopes to find by placing and displacing by sliding and shifting, somewhere on the border between hardly something yet and already too much, somewhere between wilderness and composition, between apparently chaotic and seemingly composed.

During his residency in wpZimmer, Wouter Krokaert will continue to work on the choreography together with Charlotte Vanden Eynde and Katja Dreyer. This material of movements will give direction to the vision of the landscape. Besides this collaboration, he will work further on the objects by himself.

BE
https://wouterkrokaert.wordpress.com
The need to draw made Wouter Krokaert study graphic design. And it was during these studies that he discovered dance, as a way to respond to that same need. This has led him to collaborate with Meg Stuart and Gary Hill, Rachid Ouramdane, Claude Wampler, Emmanuelle Huynh, Yukiko Shinozaki and Heine Avdal, Pieter Ampe, Marc Vanrunxt, Mette Edvardsen and more long term; Christian Rizzo, amongst others.

He has made drawings for the Royal Museums of Art and History (Brussels), for the Museum of Fashion and Textile (Paris), and has shown his drawings during expositions in Espace le Carré (Lille), la Maison Grégoire (Brussels), Museum M (Louvain), the Lux (Valence) or the ICI-CCN (Montpellier). He also published the book Paysage avec Jeanne (edited by Frémok) – in which he confronted his drawings with these of Jeanne le Peillet. He created the performance Kanttekeningen (drawing in the margins) and for the last several years, he has been teaching at the faculty architecture of the KULeuven.