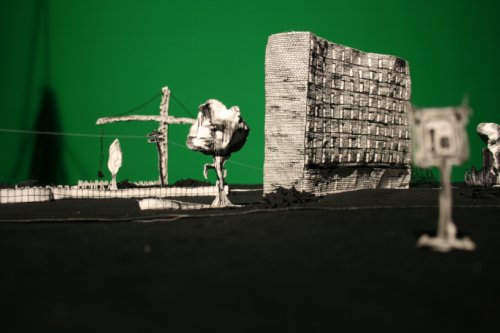 In 2010, multimedia designer Naomi Kerkhove astonished her audience with White Out, a black and white miniature world stitched together with a sewing-machine, in which people, houses, trees and streets were brought to life in thread. With the help of an old surveillance camera and an unsettling soundscape, the amazing little town became the setting for an intriguing road movie. Dark, disorientating, but as clear as the night.

In Valies (Suitcase), her second production, Naomi tacks on a sequel which explores the border region of comic strip, design, music and film. Whereas White Out activated a sketchbook in a three-dimensional world of textile, Valies burrows its way down the rabbit hole of animation film.

Just as passers-by on the street or in stations sometimes seem to dissolve in their surroundings, so too the characters in Valies are swallowed up in the cinematic world around them. But at the same time they manipulate their environment in a direct and physical way by means of intelligent textiles and interactive sensors. Valies does not tell a straightforward story, but investigates how seemingly individual trails are interwoven in a world in which everyone is a passer-by. By means of images like daydreams your imagination gradually takes wing. You disentangle a patchwork of impressions and stories by following a thread which inevitably leads back to you.