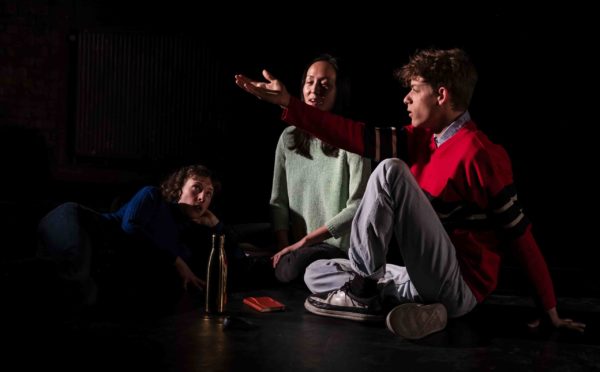 After Flamer – her dance duet with her brother Lander – dancer and choreographer Femke Gyselinck creates the musical dance performance Moving Ballads, in search of unprecedented relationships between pop music and contemporary dance, lyrics and lyricism, representation and imagination, choreography and improvisation.

Moving Ballads takes the word ‘ballad’ literally: in an etymological sense a danced song, moving lyricism. The winch is replaced by a battery of synthesizers, played by the four performers: three dancers, one pianist-composer. The latter, Hendrik Lasure, composed a ballad that musically and textually plays on Joni Mitchell’s whimsical and rich oeuvre. From that one song, the four performers present a series of variations, from strictly musical, to silent dancing.

The principle of variation invites the spectator to triangulate lines between music, words and the movements, to detect shifts in meaning and thus to ‘read’ the bodies as bearers of meaning. Moving Ballads searches for the no man’s land where movements are hardly not speaking, in which a physical form of rhetoric takes shape that is then uncovered again.

Femke Gyselinck uses choreographic principles that seek a balance between organisation (Joni Mitchell: ‘fluid architecture’) and physical individuality, between stylized movement and carelessness. The central theme is the counterpoint formed by the individual dancers, and how each of them finds physical eloquence in a way that is characteristic of them, and gives shape to words.

Flirting with representation, daily movements and gesticulation, the performers set the words in motion, meanings are briefly tangible, touched and confirmed, after which the concreteity of a representation once again tilts into the abstract of mere corporality. For a gesticulating body is often revealing, but it cannot speak with one voice, as a result of which meanings can never solidify, invariably remain in motion, and are immediately liquefied again. In the words of Joni Mitchell: ‘I’m fluid. You know. Everything I am I am not.’