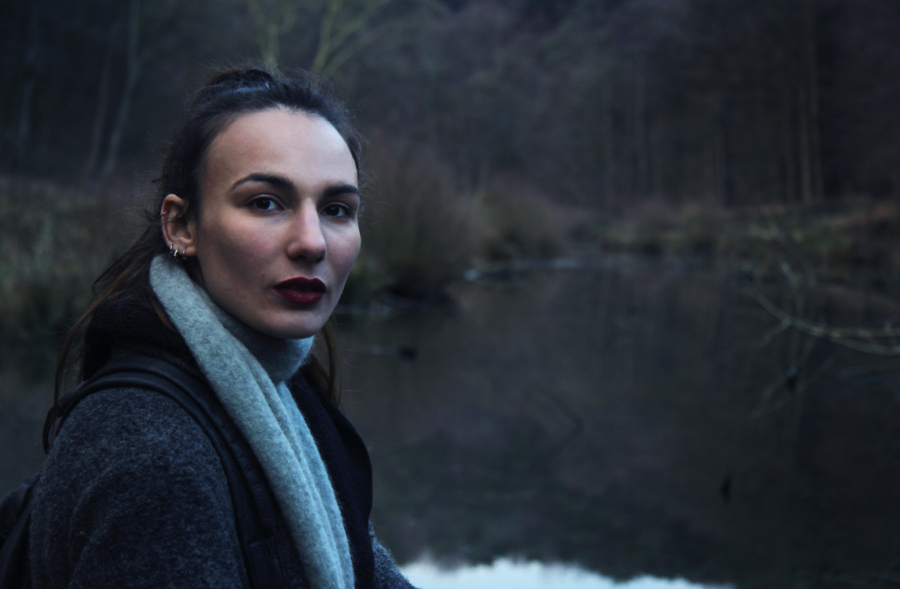 Dounia Mahammed graduated from the Drama Department at the KASK in Ghent in 2015. Her work displays an exceptional sensitivity to language, humour and a visual way of thinking.

In her graduation production, Salut Copain, Dounia uses language as a medium in which to philosophise, dream, draw, hesitate and question on stage. In w a t e r w a s w a s s e r she discovers a new way of communicating in which her fanciful associations and movements conduct a poetic dialogue with Alan Van Rompuy’s music. De Standaard awarded the show five stars: “Mahammed’s gift for language, sound and rhythm makes the banal special and the stale fresh.”

Alan and Dounia will continue working together in their new creation, GALM (working title).

Dounia is particularly interested in social issues, philosophical reflections and the poetry of everyday things. Her work is intended to tell us something about mankind and being human, and swings from wonder to despair. While a student, she created the play Woudwachten (2014) with visitors to Villa Voortman (an open house for people with a dual diagnosis) in Ghent. She had previously worked with Silke Huysmans on Manger de l’O (2013), with Mira Bryssinck on Usotroop (2014) and with Anjana Dierckx and Lukas Smolders on Schaduwmensen (2013). In August 2016, she won the Young Theatre Writing Prize at Theater aan Zee in Ostend.

Dounia is currently writing the text for Ophelia, a production by Inne Goris in collaboration with LOD, Opera Ballet Vlaanderen & Het Paleis. She was also asked to perform in the new creation of Tibaldus and Simon D’Huyvetter.

Dounia entered into a long-term collaboration with wpZimmer in the fall of 2015.

Alan Van Rompuy and Dounia Mahammed want to create an eventful-music-and-text work that hovers somewhere between a concert and a performance.

In Panic & other Attacks Dounia is looking for recipes that can save us in difficult situations.

A whimsical, poetic show, w a t e r w a s w a s s e r makes us painfully and joyfully aware of the fluidity of life.

In Salut Copain Dounia Mahammed uses language as a medium in which to philosophise, dream, draw, hesitate and question on stage. Inspired by the work of Daniil Charms and Paul Auster, among others, she creates a virtuoso solo on identity and difference. Dounia's work is intended to tell us something about mankind and being human, and swings from wonder to despair.