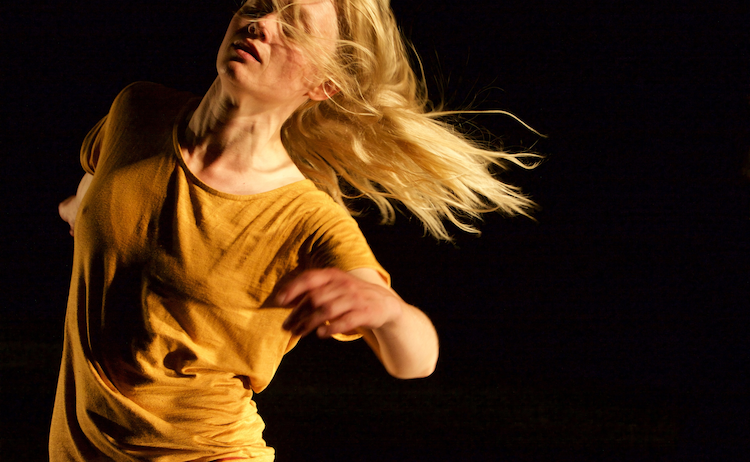 Charlotte Vanden Eynde is a Belgian dancer, choreographer, video artist and actress. Vanden Eynde’s tenure at P.A.R.T.S. did not go unnoticed. While still at school she created the short solo Benenbreken, the short duet Zij Ogen and the quartet Vrouwenvouwen. Since then, she has become well known for her personal, intimate works. In 2000 she created the duet Lijfstof in collaboration with Ugo Dehaes.

On three occasions, she has worked with theatre-maker Jan Decorte: on Amlett (choreography, dance and performance), Cirque Danton (choreography) and Cannibali! (choreography, dance and performance). She was the lead performer in Meisje, the debut film by Brussels film-maker Dorothée van den Berghe, for which she received a nomination as Best Belgian Actress 2001/2002 and for which she won the Best Actress Award at the Amiens film festival.

Her education in video and film art at the Royal Academy of Fine Arts in Antwerp resulted in the creation of the duet MAP ME (2003) together with Kurt Vandendriessche, which has since then been performed on national and international stages. In april 2005 she created Beginnings/Endings, a creation for six dancers which has been presented at Springdance in Utrecht, Kunstenfesivaldesarts in Brussels and deSingel in Antwerp. Since then she has been commissioned by Belgian musea to do several video installations.

In 2008 Vanden Eynde accepted to be the coach for Honger, a performance by Dolores Bouckaert and Elke Boon, commissioned by CAMPO (Ghent). In 2009 she returned to dance with I’m Sorry It’s (Not) A Story, a remarkable solo in which she sets out to (re)discover herself. In 2011 Charlotte created Shapeless, a solo once again. This time she entered into a dialogue with the movement vocabulary she appropriated through the years, starting from purely physical, formal and dynamic qualities of movement. The performance premiered in May 2011 at Kunstenfestivaldesarts.

n Shapeless, Charlotte Vanden Eynde continues the movement research she initiated in I’m Sorry It’s (Not) A Story (2009). Point of departure are the purely physical, formal an dynamic aspects of movement. The dynamic, something that was not very present in her earlier work, gets a lot of her attention.

In I'm Sorry It's (Not) A Story she expresses her associative language of images with pure movement and dance. She is looking for the 'image’ and poetry in movement.

Charlotte Vanden Eynde and Kurt Vandendriessche literally map out their own bodies, mainly by means of video images projected on their bodies. Close-ups of body parts and the mutual touching of the two performers make MAP ME a highly tactile piece.

The concept of thinking together, as two parts of the same brain that can also function autonomously, is the starting point of Hyphen.