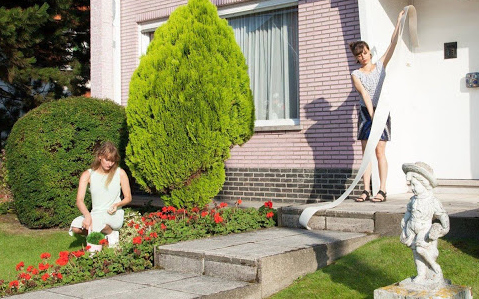 At the end of 2012 Oshin Albrecht (°1986) and Melissa Mabesoone (°1988) founded the collective ‘buren’. The term ‘buren’ was found in Heidegger’s ‘Building, Dwelling, Thinking’ in which ‘buren’ coincides with building and living. For them, buren functions as a noun and as a verb. As an umbrella term for practice and as a way of working together. The way our work relates to an environment, physically and content-wise. Something that is open for change and transformation. buren is also a third person, the one we deal with and relate to. A surrounding, the thing we can escape into or cannot escape from, an engagement we continue to make. In 2018 ‘buren’ celebrated its 5-year anniversary with everyone we every worked with.

Their work consists of performances, videos, texts, photos and installations. They navigate through themes as femininity, community, domesticity, sexuality, labour, popmusic and neoliberal fantasies. These subjects are approached with a sense of irony and humor as well as a future-oriented imagination. Central is the de/re-construction of image and language. They play with different meanings of words, gestures and things, creating objects to be handled as props or presented as art- objects.

‘Blue Skies Forever‘ is a performance that plays with the frontal gaze of the conventional theatre set up, female representations and media references. Together with Peter Aers the duo developed a salon ‘To Care as Caress‘ at Vrijstaat O. With Frank&Robbert/Robbert&Frank they created the exhibition ‘The Pursuit of the Gentlemen’s Gentlemen‘ at Croxhapox. April 2017 their book ‘Confusion of Tongues‘ was published by Posture Editions in collaboration Koen Brams. At the end of 2017 they became HISK laureates.

Fascinated by the different representations of women in popular video clips, buren started working with two figures from Ever is Over All of Pipilotti Rist: Dorothy, based on Dorothy from the Wizard of Oz and Officer, a female police officer.

Spare Time questions our use of leisure time: are we as free as we think? When we dispose of an endless set of possibilities, do we feel liberated, or oppressed?