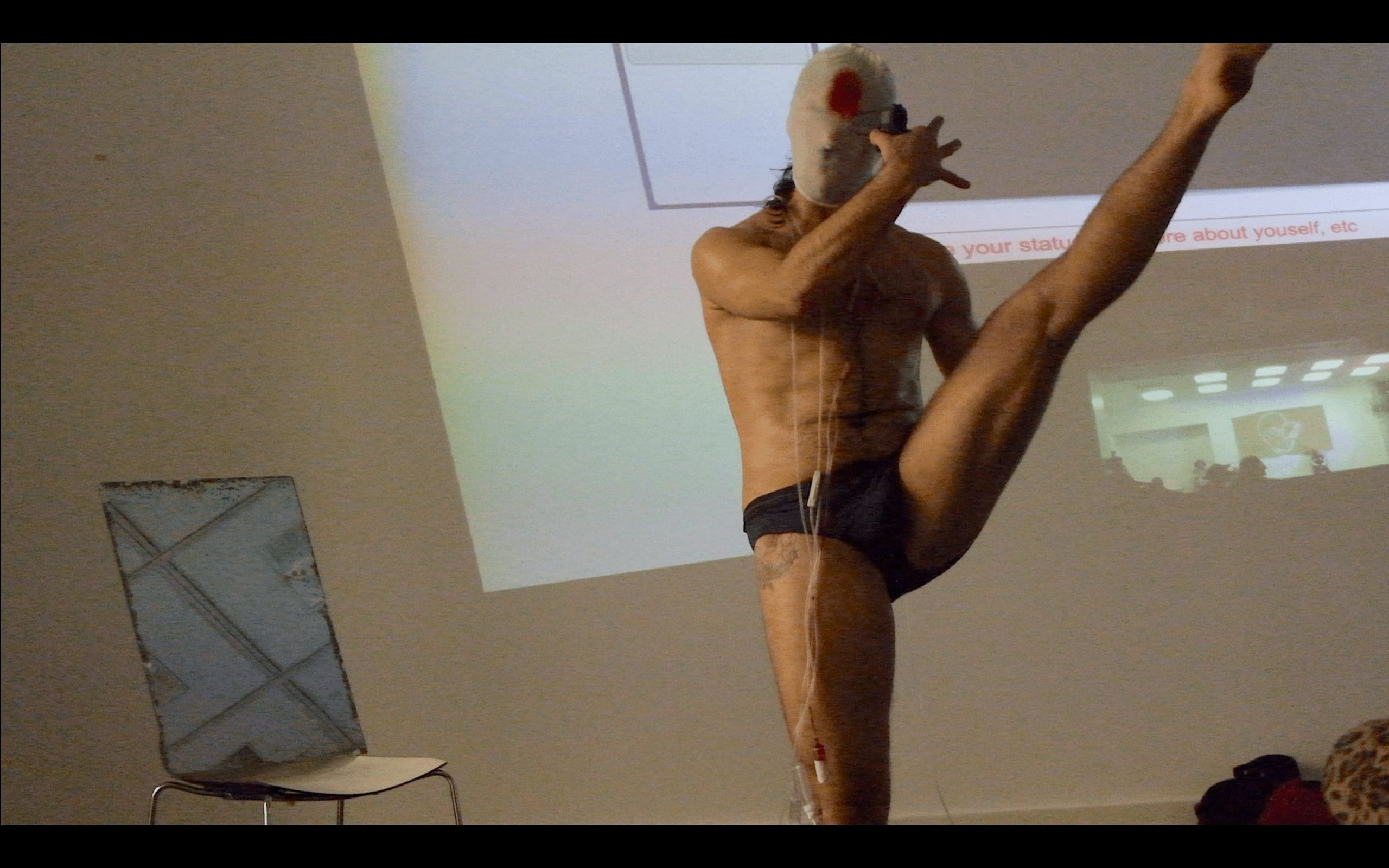 In our current times, we are under the influence of Subjectivity as the main force of cultural capital in performance making and curation. When dancing on stage, this might amount to becoming one’s own product, or the domination of a performer’s Identity as the central material a dance can point back towards. This self-referential loop can prove to be paralyzing, stifling a dance and what it can offer.

As a strategy against this, as well as to open up what a body and a dance can mean in performance, Nathaniel Moore, Julia Rubies Subiros and Tilhenn Klapper research a dance practice which witnesses dance on its own terms, pointing to movement in itself. This decentering away from Subjectivity as the main form of cultural capital on stage instead directs our eyes to witness the relationship between a body and a context, to the relational ecologies present in the space. What a dance can refer to when seen in itself is perhaps an endless transition, a glimmer of potentiality. It encourages an embodiment which isn’t limited to an individualist discourse of “one’s own body,” but rather celebrates embodiment as the recognition of relationship between human, animal, spatial, and cosmic bodies, responsibilizing us towards an unalienated body of things.

Here they are inspired by the work of Paz Rojo and Sara Shelton Mann, as well as the many other art-workers forming thoughts in the dimension of how to give consciousness to the abundant relationships which devise self(s) and move bodies.

How might dance enter a performative context on its own terms(not being in service to anything but itself)? How does one witness the dance in itself(as opposed to seeing a subject dancing, or a dance which only refers back to an identity or a concept as its main concern)? What kinds of dramaturgical tools make space for a dance to be seen on its own terms? and how might a dancer accompany such a dance so that it does not become about the dancer, but about the dance in itself? What are the terms of dance, which is to ask, how might one think with the ontology of dance, and how might this thinking in itself create a new opportunity for how we understand with dance in performance?

And lastly, looming in the background, Nathaniel, Julia and Tilhenn are inspired by a desire to dance with ghosts. To, through movement, allow to be seen the possession of the body by the Self(**), and through this seeing and remembering ask, what does it means to be a body, (right) now?

**(A visible underbelly, a god, a river, a set of parents, a death drive, a desire to be seen, a choreographer, whichever famous one you can imagine, an old teacher, a driving coach, an uncle, water, the last food one ate, the milk they drank when they were young, the dominant social attitude relating to the performance of sexuality, the last time one took a bath, everyone one has ever met, everything one has been touched by, or touched, the thoughts sent from others through space dripping off of one’s tongue, the ideology of original thought, the wars happening now, and the wars happening 70 years ago, the wars happening in the households, the wars happening at work, the desire to re-enter the womb, the mess we are all in, the place where we all meet and call it a name, self)

BE, US
https://www.nathanielmoore-or.com/
Nathaniel Moore is a Brussels-based artist with roots in the San Francisco experimental dance scene. Through their work as a dancer, researcher, choreographer, and archivist he is inspired by a necessity to address alienation, and create moments for connection through the activation of shared social, psychic, emotional, and political bodies.

1996 ◊ ES, BE
Júlia Rúbies Subirós (1996) is a dancer, collaborator and creator of performing arts from Barcelona, living between Barcelona and Brussels. She works on choreographic thinking through sociological / philosophical approaches, using documentary material and questioning the means of production and the formation of artistic discourse.