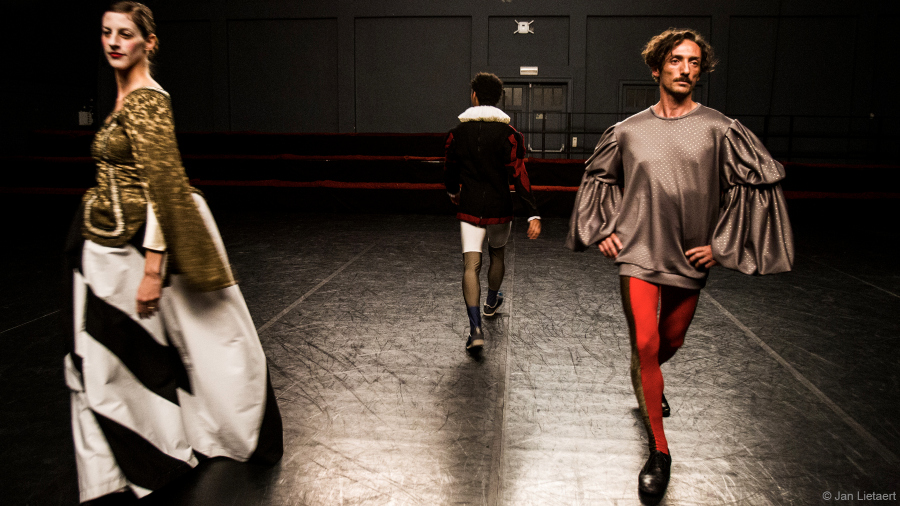 In proposing this research project, The Middle Ages, I want to explore the notion that we live in a time beyond history, and to research what implications this notion might have for how we experience and work with time within a performance context. The Middle Ages could of course refer to the historical period itself, but for me refers more aptly to now, as a time which is inherently “middle,” which is a period of neither/ nor- vague in its sense of linearity and teleological aims, and whose speeds have unhinged the very definitions of ‘fast’ and ‘slow’. The middle ages is the period that we live in now- in a perpetual time warp- in constant speculation of the future and with a far greater (self-) consciousness of the past. It is a time ‘after history’, but with no real foreseeable future social project beyond further individualism, accumulation, and acceleration. It is a period where we are aware that our current pace forward is no longer sustainable but where we can neither turn backwards.

Some have argued that we in fact should speed up, that only this can bring about a breakdown and eventually the radical changes needed to imagine a sustainable framework for society. Some have argued that we are already moving in breakneck speed towards inevitable disaster. Confronting these paradoxes puts the individual in an uncertain position- am I moving too fast, do I need to move faster to keep up, how much faster is fast, now? What happens if I and everyone around me keep going faster?

But these questions, while perhaps daily concerns on an individual level, only echo greater societal uncertainties about what the now even is, what it means to us, whether it really needs to keep moving forwards as we’ve previously believed it must. Not knowing whether to move forwards or backwards, faster or slower, within the current flow or against it, creates a kind of historical, rather than individual existential crisis, a perpetual time warp where slow and fast, past and future bend, slip, and wrap into one another.

If time is very basically one of our only common threads together in this world, what does time mean as we become increasingly individualized and as socio-economic realities mean greater differences between bodies in terms of their speed and currencies of ‘being contemporary’? What does this unhinging of the meaning of ‘now’ mean for the structures and dynamics of a ‘common movement’? If, previous structures that supported a united social body- from religious rights, military choreographies, and worker chants have increasingly given way to the movement of individualism, do we still move together in the same time? Do we live together in the same time? If not, certainly we don’t live beyond cause and effect; actions still do have consequences. Living beyond history does not mean living beyond events and their ramifications. But how would these individualized times and timings cause, effect, resist and influence each other?

As a choreographer, I’m particularly interested in these questions for several reasons. Firstly, contemporary art has always been a space to communicate ideas about what the now is. But if indeed, as I hope to examine more closely, we are in a time where the now itself is in question, how can art communicate ideas about that? How might we encounter or envision this period of uncertain time and warped speeds? Secondly, the relationship of time to choreography is inherent and simply unavoidable, whether you choose to work with it on a structural level (so far I never have) or not, you still work with it as an essential aspect of choreography. I’m interested in what new concepts of time I might be able to develop through this research and into what kinds of new choreographic practices. Lastly, there’s the focus of my work in general which I hope isn’t overly concise or consistent, but which does have areas which I often return to. I’m interested in how this research might intersect with three of these areas that return again and again for me- society and the socio-political; fiction- especially in terms of science but moreover science fiction; and lastly the visual and the relationship between the body in performance and the so-called ‘plastic’ arts.

1981 ◊ US, BE
http://www.thegreatindoors.be/
Andros Zins-Browne began practicing ballet at an early age at the Joffrey Ballet School. After completing a degree in Art Semiotics at Brown University (US, 1998-2002), he moved to Brussels in 2002 to study at P.A.R.T.S., the Performing Arts Research and Training Studios in Brussels (2002-06). He later pursued a research programme at the Jan van Eyck Academie in Maastricht (2010-11) to work on his research project Immaterial Bodies, Embodied Materials. This work spawned his creation Welcome To The Jungle, which developed themes of climate change, ‘global weirding’, and how to consider choreography not only in terms of bodies but in terms of space and the seemingly inanimate as well. Aside from his performances as a dancer with Jonathan Burrows, Mette Ingvartsen, Tino Sehgal and Maria Hassabi, Zins-Browne’s own creations, in which he often collaborates with visual artists, have been produced and/or presented across Europe, including the Stedelijk Museum in Amsterdam, Centre Pompidou in Paris, Dance Umbrella in London, HAU in Berlin, PACT Zollverein in Essen, MDT in Stockholm, Vooruit in Ghent, deSingel in Antwerp, Kaaitheater in Brussels and the Impulse Theater Festival, Düsseldorf, where he received the Goethe Institute Award for The Host. Since 2007, Zins-Browne has been an associated artist with wpZimmer in Antwerp, and now Hiros will support him on a trajectory basis.