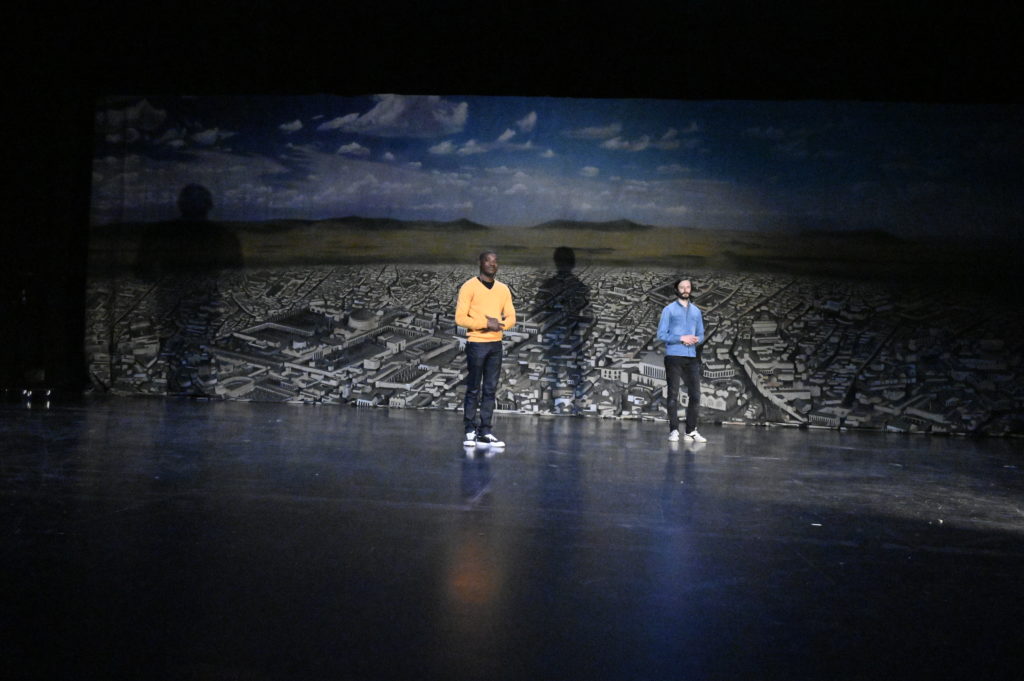 The Chance to Find Yourself

Their collaboration began when Benno Steinegger, a white immigrant from Italy, asked Jovial Mbenga, a black immigrant from Congo, to engage in conversation about mechanisms of power, exclusion and prejudice. It became an investigation into the deeper and unconscious structures and mechanisms that shape their opinions, feelings and stereotypes, based on a shared belief that they must first make these mechanisms visible in order to then be able to change them. The core of their research is therefore about two artists who question themselves.

Pretty soon, they noticed that the research raised more new questions than it answered. To share that process on a stage, it was crucial to look for a form in which those questions could be theatricalized in an open, recognizable and even humorous way. By giving each other assignments, reconstructing conversations, and playing open cards about their often bumpy collaboration, the beginnings of a dramaturgy that is both layered and open emerged. They were able to test this methodology with an audience during a short show moment and it proved to work well. It is therefore this ‘meta-play’, in which the reconstruction of the working process through theatrical translations forms the performance, that Benno and jovial want to develop further into a fully-fledged performance.

In order to do this in a self-conscious and substantiated way, they are gathering a multi-voiced team to critically question the process and provide other frames of mind. For example, Lara Staal is involved in the project as dramaturge, theater maker Gaia Saitta acts as co-director, and activist and writer Joëlle Sambi Nzeba and cultural anthropologist Constanza Lanzara, among others, engage as outside eyes. They have immersed themselves in the controversial novel Heart of Darkness by Joseph Conrad and the critical reading of it by Chinualumogo Achebe, in the book White Innocence by Gloria Wekker and in the film The Passenger by Antonioni. The subject matter they are working on is both highly topical and highly charged. By building up a solid theoretical basis and then approaching issues such as racism and colonialism from their own perspective, they hope to create a performance that evokes recognition, reflection and questioning. They aspire to make a performance that stands in the world but does not only reflect the current discourse. By making themselves vulnerable they want to show that breaking down power structures is a long-term work that is often painful, sometimes funny, but above all something you have to engage with instead of just talking about it as a concept.

Both their way of working and the final performance are thus an attempt to engage with all the doubts, prejudices and discomforts that come with exposing the racism and structural frameworks of thought that each of us carries. This methodology, which is in full development, they also want to develop into a solid fringe program with debates, workshops and performances in schools. Through poetic images, humorous misunderstandings and playful conversations on serious subjects, they hope to reach a wide audience and provide them with a possible framework to take a closer look at themselves and their position.

IT, BE
http://www.bennosteinegger.com/
Benno Steinegger’s work has always evolved around investigating the concept of ‘identity’. He tries to break through the surface of appearances, to capture the complexity of continuously changing identities in contemporary societies. With his work, he questions the stability of identities and aims to build up dispositives that offer his public the chance to reflect on themselves, in order to catch aspects of their own changing identities.

Steinegger has previously worked with the collective Codice Ivan. Between 2013 and 2015 he worked on the long-term project The Casting, an investigation into the political implication of the search for beauty. This research produced several staged portraits in the form of performances by amateur-actors. His latest performance, i (to be defined) (2016), is a reconstruction of Steinegger’s own identity through the eyes of people he has interviewed during two years. He is currently part of the Artistic Nursery of Garage29.

BE
For the past ten years, Jovial Mbenga has been active in the Belgian arts scene as an actor, writer and director. He works for both theatre and film. His Belgian career started at KVS, as part of the Belgian-Congolese creation 'A l'attente du livre d'or' (2010, directed by Johan de Hollander).