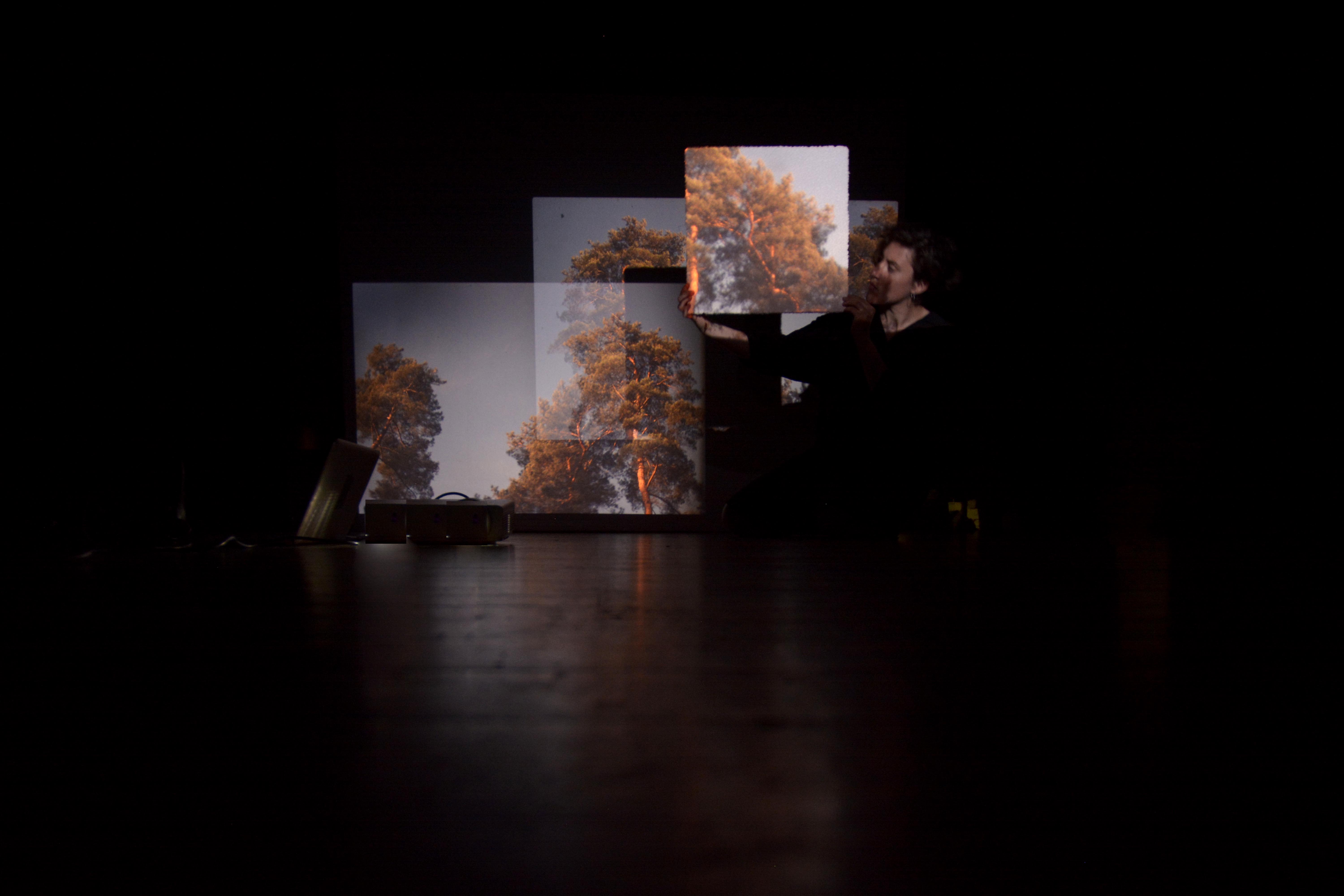 A spatial performance setting in which frames, shadows, images, surfaces, light sources and sliding objects enter into dialogue with each other and the spectator. While scenes are set in motion by the performer, a dark landscape opens up.

In the first phase of the creation process Evelien Cammaert started photographing on a 35mm slide film. A medium that is both direct and mysterious. Direct, because it produces a transparent image that becomes visible, simply by shining a light through it. What you see is what you get. From the moment of recording until projected by a slide projector, the image has traveled a mysterious path. On a slide film, also known as a reversal film, a negative image is actually first recorded and developed in the dark room. Instead of fixing the negative developed parts, they are removed and ‘exposed’ again so that after a second development they are reversed into a positive image. The result differs from lab to lab, from light source to light source and from the plane and frame onto which or through which it is projected. The mystery of the photographic image and the influence of atmosphere, of temporal and spatial conditions on our perception is the field of research of this piece. The border between concrete and abstract is blurred by darkness. You walk into a universe of ever-changing, painting-like images, slide projectors, scenes, planes, spots of light and shadow, distortions, dimensions and different perspectives. Can we get to know and appreciate dim and uncertain realities by relating differently with time and light?

1986 ◊ BE
https://eveliencammaert.com/
Evelien Cammaert is performance –and visual artist. She obtained degrees in Photography (BA Narafi Brussels 2010) and Performance Studies (BA, Academy of performing Arts, Maastricht 2016). With a background in both disciplines, she creates hybrid languages in performances and scenographic constellations. She investigates interactions that occur between these different realities and how they can intensify and alter our perception of space and time.

The focus on notions of time and duration is a recurring underlying presence in her work. By slowing down the tempo, even freezing it, Evelien tries to move herself and the spectator out of our daily speed, in order to generate a collective concentration. Space to alter the order of events. This is translated into interactions between past and present, memory and live experience or spatial interventions.