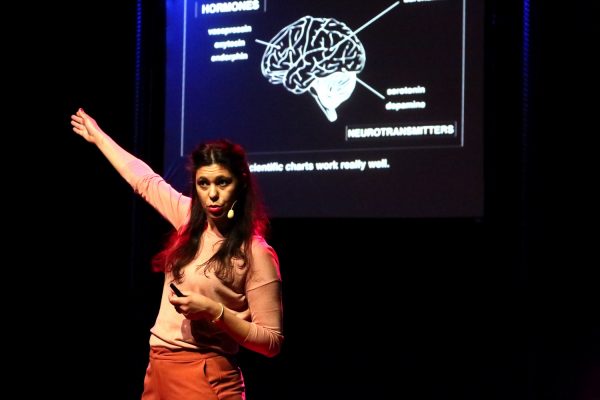 Short of Lying is a storytelling performance about deception. More specifically, it’s a project about the relationships between the rhetoric strategies used by ‘bullshitters’ (in communication media) and ‘unreliable narrators’ (in literature). In literary criticism, the unreliable narrator is he who misreports, misinterprets or misevaluates events, usually blurring the realms of ethics, knowledge and perception in highly entertaining ways. In reality, the bullshitter is he who has no concern with the idea of truth, who involves his audience in a program of making assertions without paying attention to anything except what suits one to say (and doing it to whatever extend the circumstances require).

The piece is situated in the conflicting realm of online publishing, which since the 90’s has been appropriating narrative thinking and storytelling to serve the neoliberal logics. Drawing inspiration from several works of fiction — written by authors such as Dostoyevsky, Poe, Mark Z. Daniewlewsky, Zöe Heller, Italo Calvino, Chuck Palahniuk, Bret Easton Ellis — Luanda Casella’s intend is to reverse this process of appropriation and reflect on bullshit through a literary perspective.

Luanda takes the role of the storyteller, making use of personal narratives to address stories of media manipulators, corrupt politicians, professional impostors, neuroscience marketeers, con-artists, Ted talkers, religious leaders… Short of Lying is about how plastic deception can be and how it assumes different roles on the level of discourse: bluffing, mystification, fraud, misdirection, imposition, propaganda, trickery, hoax, bullshit.

BR, BE
http://www.luandacasella.com/
Luanda Casella is a Brazilian writer, storyteller and performer living and working in Belgium since 2006. Her research focuses broadly on the ways individuals relate to narratives in order to create a sense of identity, to form their opinion of the world, and ultimately to protect themselves.

During the last years, she has been studying 'the rhetorics of deception', investigating the use of storytelling in communication media. More specifically, through a comparative study between instances of “deceptive discourse” in communication processes and the voices of first-person “unreliable narrators” in classic and contemporary works of fiction