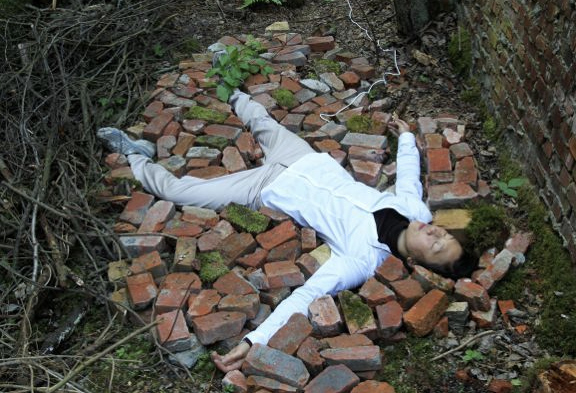 Michel Yang is an American born, Brussels-based performance artist. Michel’s primary medium is the body, however, video and photography have recently begun to enter her work as extensions of her body practice. Presently Yang is following an audio-visual post-graduate with Sound Image Culture. She received a Master of Fine Arts in Dance at New York University’s Tisch School of the Arts and has followed post-graduate studies with a.pass and Sound Image Culture. As a performer she has worked with Lilia Mestre, Stefan Dreher, Pierre Droulers, Mia Lawrence, and Walter Verdin to name a few. As a teacher Michel’s subjects are contemporary dance, improvisation, and forms of materialization.

Oracle is a collective practice developed by Caroline Daish (BE/AU), Justine Maxelon (BE/DE) and Michel Yang (BE/US) in 2015. In the past three years Oracle presented in diverse contexts and appeared spontaneously in public spaces.

Oracle is an improvisation practice where body, voice, identity and participation meet: a public, emancipative and sharable act that involves individuality in a communal setting.

Within the frame of the Choreography and Improvisation Research courses, Michel Yang brings the 3rd year dance students of the Koninklijk conservatorium to work off-campus. The aim is to bring the participants into new relationships with their environment via artistic practices and research.

The third-year dance students of the Royal Conservatory in Antwerp come to wpZimmer in the frame of the Choreographic Research course.