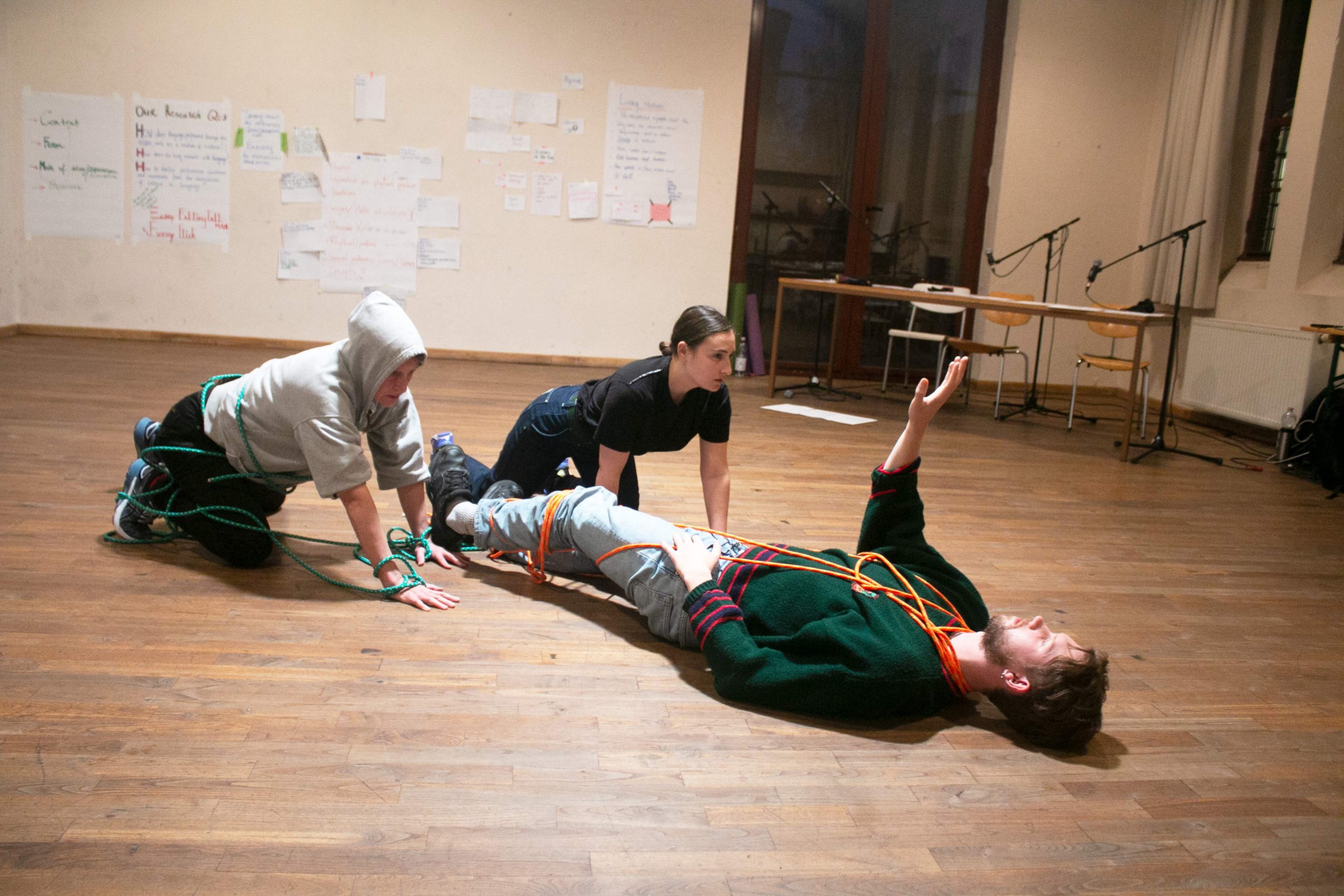 Christine De Smedt, Liza Baliasnaja and Theo Livesey met in P.A.R.T.S. in 2013. In 2020 they began collaborating on a research into ‘Low Intensity Violence’ and are currently working towards a performance entitled The Third Room, premiering in DeSingel, December 2022.

–Liza Baliasnaja is a choreographer and performer based in Brussels. In 2016, she completed the Performing Arts Research and Training Studios (P.A.R.T.S) program in Brussels and soon after began studying Philosophy at the University of KU Leuven. Liza positions herself in the field through multiple roles- choreographing, performing, artistic assistance, mentoring and teaching.

–Theo Livesey, (°1995), is a performer and maker working in dance, theatre, and the written word. Since graduating from P.A.R.T.S. in 2016, he has been working closely with Gisèle Vienne as a performer and assistant in multiple works. He has been constructing his own work on stage and on the page, as well as engaging in various collaborative working processes.

-The artistic work of Christine De Smedt (1963°-B-lives in Brussels) is situated between dancing/performing, choreographing, coordinating, organizing and curating artistic projects. Being a member of the company les ballets C. de la B. (Gent, Belgium) from 1991 until 2012, she created many of her own works, and she has also collaborated with M. Stuart/Damaged Goods, E.Salamon, M. Spångberg, M. Edvardsen, P. Gehmacher, X. Le Roy, V. Miller, J. Ritsema, M. Van Imschoot, amongst others. Until today she is still engaged as a faculty member and mentor at P.A.R.T.S. and regularly mentoring artists outside the school context.

The Third Room is a collaborative project centred around the notion of Low Intensity Violence. The notion of Low Intensity Violence points at violence(s) that are not immediately felt or visible, but permeate our everyday life: violence(s) that do not instantly cause obvious physical or psychological damage but through time, repetition and erosion have a damaging impact. Our work unfolds from the ethical stance that each human being is intimately familiar with violence by the sheer fact of being alive, living in a society